I am being followed.  Or, rather, I am following.  I keep glancing over my shoulder to see if it is still there.  Not because I feel threatened, but because it is cheering me along, whether on foot or bicycle.  The subject is Packera aurea, known commonly as golden ragwort or golden groundsel.  Packera is unflinchingly cheerful.  If you are following Packera, you are likely in a wooded setting on a rocky ridge or a floodplain or maybe a rain garden, and it may be early or late Spring.  How fortunate for you!

For me, 2021 seemed to be the year of following Packera.

It started on a ridgetop in April in Burkes Garden, VA, the highest valley in Virginia, and known as “God’s Thumbprint” for the appearance from the air of a large valley encircled by high mountains.  In mid-April, the ridgetop where the Appalachian Trail crosses at around 3,500 feet was still a grey, winter landscape.  In fact, on our trip, it was snowing and blustery with temperatures in the 30s and low 40s.  We had inadvertently regressed back into winter!

I entertained fond thoughts of my warm Piedmont home some 3,000 feet below.  That is until I eyed a patch of Packera, peeking up through the grey rocks and tree trunks, the bright yellow flowers reminding me, “here you are!” 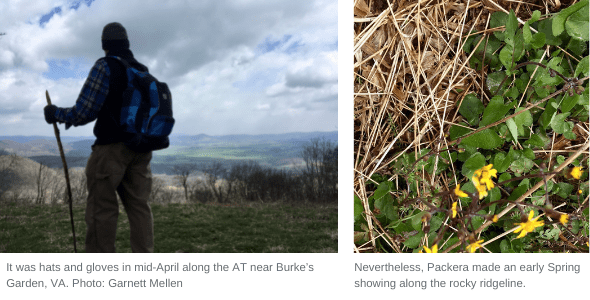 In mid-May, Packera was putting on a show along the Greenbrier River Trail in West Virginia at just over 2,000 feet and along the River’s floodplain.  Here, Packera lined the trailside ditches and rock seeps, accompanied by Wild Geranium (Geranium maculatum), Foamflower (Tiarella cordifolia), and other Spring ephemerals, cheering on the weary cyclists akin those crazy Tour de France spectators that rush out into the road.

Speaking of weary cyclists, early June found me again on the bicycle, lumbering up to the high point of Skyline Drive in Shenandoah National Park at 3,680 feet.  Packera announced itself with fanfare along an adjacent trailside, making the difficult ascent worth the effort.  Elsewhere in the Park near Big Meadows, Park Service crews were spraying the notoriously invasive Garlic Mustard (Alliaria petiolata), making room for Packera to flourish in the oak forest understory.  The grey-shirted Park Service employees seemed delighted that some bicyclist had stopped to admire their work.

Besides being cheerful, Packera is also optimistic about the future, choosing to spread itself around via both seed and underground roots, forming colonies that can persist from early to late Spring.  Don’t let those cheerful blooms fool you though, for Packera is also a tough customer, muscling its way into both dry and wet environments at all kinds of elevations.  Also, Packera does not want you to munch on its foliage, as it is toxic to the liver due to the alkaloids in the plant (although there are some reports of Packera’s medicinal qualities to treat diabetes, high blood pressure, symptoms of menopause, and other ailments).

As summer heat descends on our region, bringing with it the “high green” season, Packera will pack up its cheerful blooms and head for some happy Spring-like island somewhere.  The heart-shaped basal leaves will hold the place on the forest floor until next Spring.  So, we bid a fond farewell to Packera blooms for the season, with full confidence that they will return early next Spring.

Packera is a good choice to add to your plant list for rain gardens, bioretention, and wet meadow conservation landscaping.  The basal leaves provide a ground cover while the stalks and yellow flowers put on a nice show through the Spring. 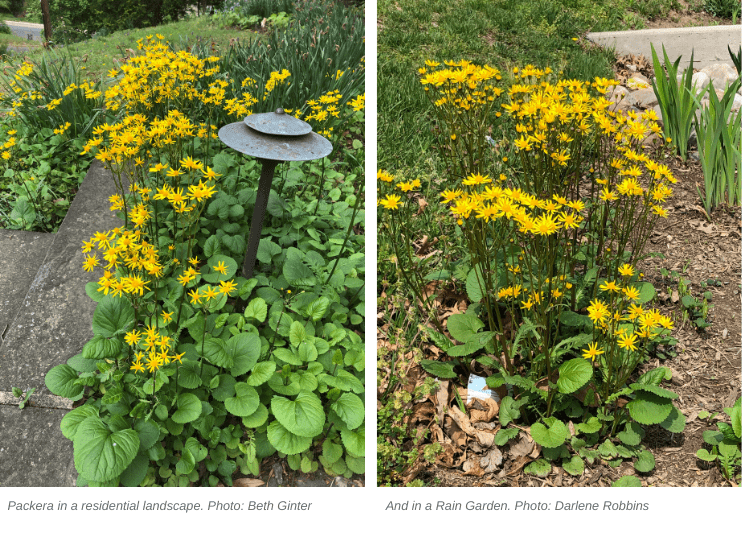 I must admit, especially this year, following Packera, purely by circumstance and good fortune rather than intent, was one of those gifts from the natural world that helped sustain my heart and soul.  I wish the same type of experience for you in your wanderings, either close or far from home.

Also, thanks for Beth Ginter, Executive Director, of the Chesapeake Conservation Landscaping Council (CCLC).  At many a Chesapeake Bay Landscape Professional (CBLP) field class, she would comment how Packera was one of her favorites, so this article gave me the opportunity to explore why.  Thanks for the inspiration, Beth! 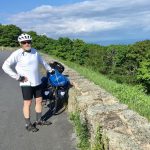 After 38 years in water resources, Dave is still trying to learn his plants!  He is based in Charlottesville, VA and operates Hirschman Water & Environment, LLC, focusing on stormwater management.  He has enjoyed collaborating with the Chesapeake Bay Landscape Professional program over the past 6 years, assisting with Level 1, as well CBLP-A and CBLP for maintenance crews.  He can usually be seen on a bicycle when not on a Zoom call. Dave maintains a blog about a variety of stormwater and watershed topics on his website, where this article is also posted.  Check it out at: https://hirschmanwater.com/blog/