The way I celebrated was to go to our River Farm in Swoope, Virginia to see how the trees and native plants were doing in the buffers we established in 2004. My wife, Jeanne Hoffman, and I own and operate two beef cattle farms in Virginia’s legendary Shenandoah Valley. One of the farms has a river, the Middle River, that flows for a half-mile through it. We call that one, the River Farm. In 2004, we enrolled the farm in USDA’s Conservation Reserve Program to exclude our cattle from the river and plant trees along the banks.

Seventeen years have passed, and yet it doesn’t seem so long ago that we planted our first trees along the Middle River. Most of them are now over 25 feet tall. It’s a wonderful feeling to look up the trunk of a towering Willow Oak you planted and know you had something to do with restoring the earth. 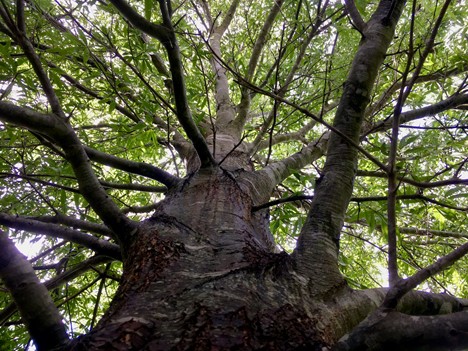 Before 2004 our cattle had access to the river and the two unnamed tributaries. Our 40-acre farm was one big pasture. Getting the cows from this big pasture to the barn was a frustrating chore. If the cows didn’t want to go, they could ford the river multiple times at any number of their favorite crossings, leaving us on the other side cursing wildly. The only way for us to cross the 10-foot-wide river was to go out to the road. Do you know how humiliating it is to be outsmarted by bovines? 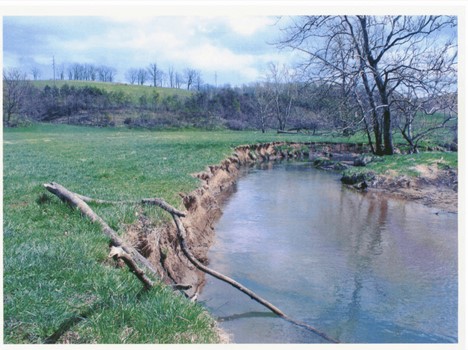 The river on our farm in Swoope before livestock exclusion and buffer planting. Photo credit R. Whitescarver

Livestock, especially cattle, destroy streams. So for farmers, the first goal in creating a riparian buffer is to design it to keep the cows out of the waterway and off its banks. We constructed fences along the river and two tributaries to help develop a rotational grazing system that not only improves the forage for the cows but helps us move the cows with ease to other grazing fields and to the barn.

Instead of one big field, we now have five smaller fields for grazing and six acres of buffers along the river and tributaries. 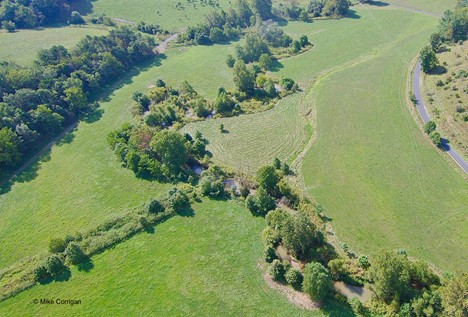 This photo shows how well our buffers were established by 2018. We now have five grazing units for our cattle. Photo credit M. Corrigan

Step Two—Plant the Trees or Let Nature Do It

We used two methods of tree planting: doing it ourselves and letting Mother Nature do it. Both were successful. Most of the trees are now eight to 10 inches in diameter at breast height and between 25 and 45 feet tall.

We planted several oak species, Red Maple, Crabapple, and other types of trees as well as several shrub species such as Buttonbush and False Indigo Bush. 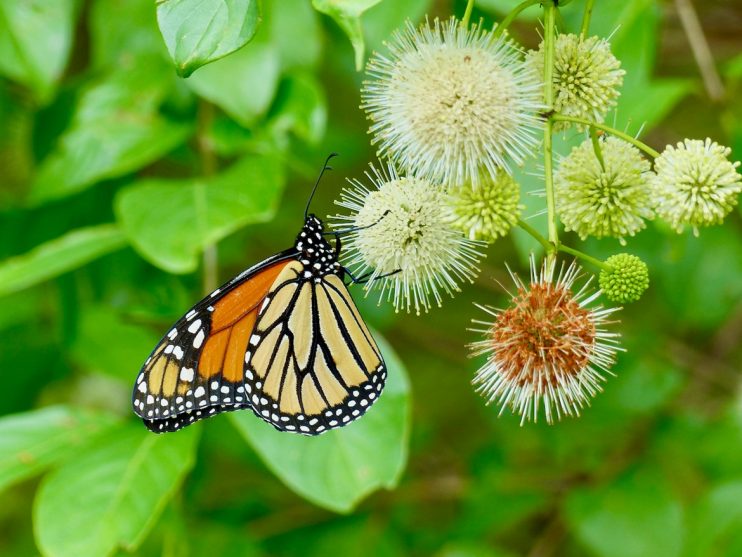 Monarch butterfly on a Buttonbush blossom in our riparian buffer in Swoope. Photo credit R. Whitescarver

As I walked along the river under the shade of the trees, I reflected on the research and progress we’ve made over the years on this farm.

The Middle River flows through our River Farm for a half mile. As part of the Friends of the Middle River sampling project, I took samples from the river every month for four years at two locations—where it comes onto our farm and where it leaves the farm—to check for E. coli. 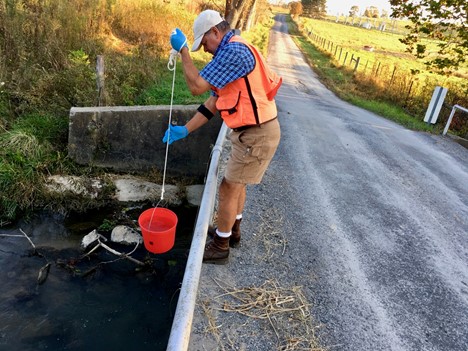 On average, the E. coli is reduced by 55 percent just by flowing through our property—thanks to our riparian buffers.

Over 50 years ago, the DuPont company in Waynesboro, Virginia, discharged mercury into the South River. In 2005 Dan Cristol, Chancellor Professor of Biology at the College of William and Mary, began a six-year study of the bioaccumulation of mercury up the food chain. One species in the food chain he focused on was the Tree Swallow because Tree Swallows eat flying insects that emerge from streams and rivers. Cristol, with the help of his associates and students, put up hundreds of nest boxes for these birds along the South, Middle, and North Rivers in Augusta County. Our farm on the Middle River was part of the control as it does not have mercury in it. 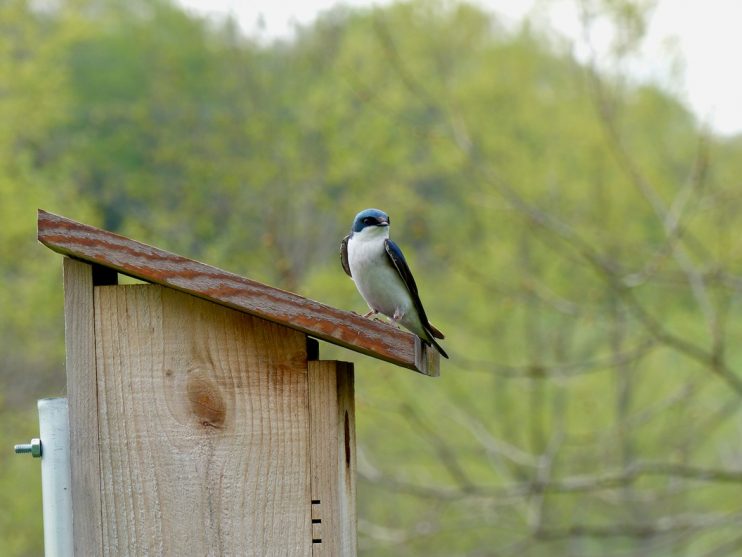 A Tree Swallow on one our nest boxes along the Middle River. Tree Swallows eat flying insects that emerge from streams and rivers. Photo credit R. Whitescarver

Cristol’s study showed that mercury does indeed bioaccumulate. The research was published in Science magazine in 2008 and in over 50 papers by Cristol and his band of researchers.

Their research was also used as part of the South River/South Fork Shenandoah River Natural Resources Damage Assessment Plan, which led to a settlement from DuPont of $48 million to various environmental organizations to improve our landscape and waters. This is the largest natural resource damage settlement in Virginia history and the eighth largest in US history. 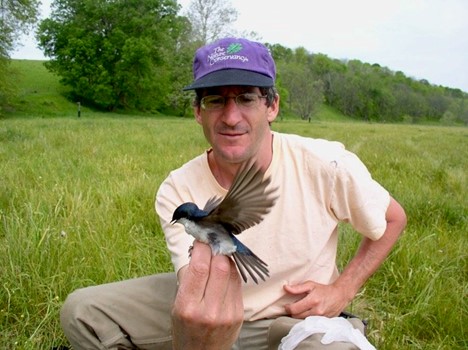 Our River Farm is also part of a network of over 150 properties on which the Virginia Working Landscapes, a program of the Smithsonian Conservation Biology Institute, conducts grassland biodiversity studies. 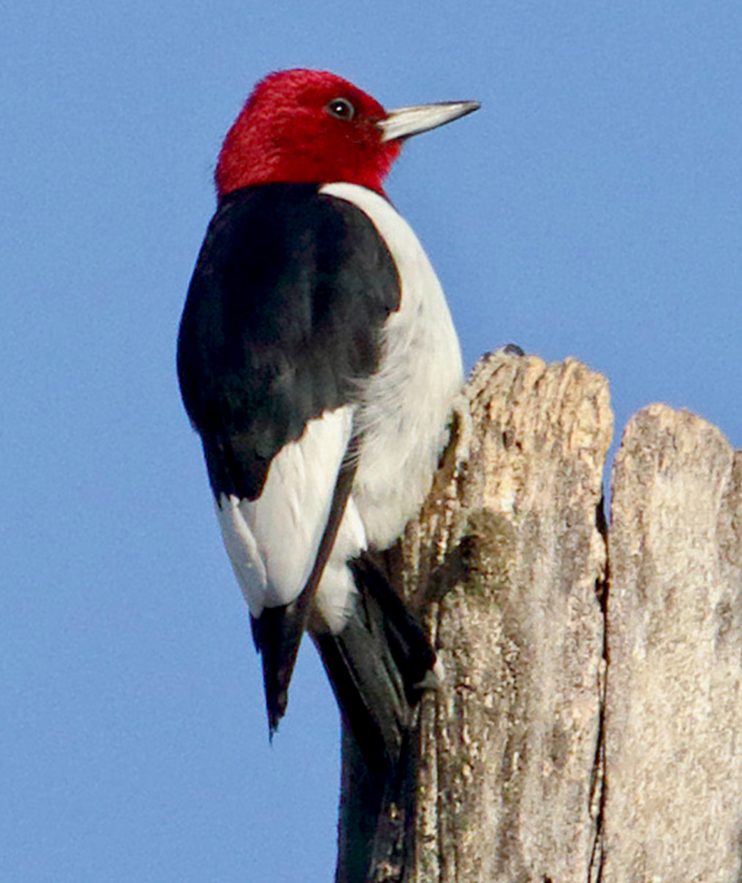 The Red-Headed Woodpecker is a species of continental concern. Photo credit ©Marshall Faintich

Most of these birds and bumblebees would not be on the farm had it not been for the grassland and forest buffers, which add greatly to the diversity of habitats.

Water Watch and the Downstream Project

Riparian forest buffers are one of the most popular best management practices on farmland, and fortunately many private and government organizations offer programs that help farmers and landowners install fences to exclude livestock from streams and to plant trees that will stabilize stream banks and provide wildlife habitat.

Riparian forest buffers make a huge difference to our planet, and they’re definitely worth celebrating!

Contact your local Soil and Water Conservation District or USDA office to find a program that best suits your land.

About the author: Robert “Bobby” Whitescarver is a watershed restoration consultant. He and his wife, Jeanne Hoffman, have cattle farms in Swoope and Churchville, Virginia. They are NACD Soil Health Champions. Bobby was Conservationist of the Year for the Chesapeake Bay Foundation in 2002 and Watershed Champion for the Alliance for the Chesapeake Bay in 2011. You can get a copy of his award-winning book, Swoope Almanac, Stories of Love, Land, and Water in Virginia’s Shenandoah Valley, and subscribe to his award-winning blog at www.gettingmoreontheground.com.