Both Feet on the Shore: Committing to the Land with the Elizabeth River Project

Before we bought our first home in April 2021, it was a rental property for ten years. Saplings waved from the gutters, foundation shrubs scratched their backs on the roofline, English ivy slathered itself across the yard, and invasive trees no hand had planted grew throughout. The inside was in similar disrepair.

But – there were multiple “borrowed” views of the Lafayette Branch of the Elizabeth River via neighbor’s driveways. During the pandemic I’d converted to working solely online, and through the windows of my new home office I could see the river shimmering in the distance.

A week after closing, I watched excitedly as a monarch butterfly floated through my new front yard. As it darted and circled it hit me: on the entire overgrown lot of 6,534 square feet there was not a single place for the monarch to find nectar or lay eggs. It might as well have wandered across a desert. 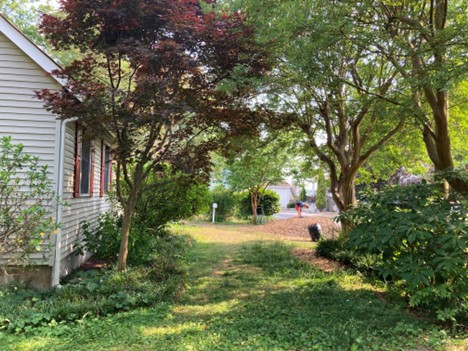 As a white Westerner (both culturally and literally – I grew up in Idaho), I was a relative newcomer to the tidal rivers of the Hampton Roads. In my lifetime I’d lived in ten states and three different countries; Norfolk was just the latest stop. Then the pandemic hit.

What would it mean to finally settle in a place and root down? Was it foolish to invest our time, energy, and emotion when climate change experts told us to run away from this region?

I took as my guide Robin Wall Kimmerer’s idea of “naturalizing”. A botanist and essayist, Kimmerer weaves an indigenous perspective into western scientific training (i.e. European-centric and colonial views) about the natural world. In her essay, “In the Footsteps of Nanabozho: Becoming Indigenous to Place” she writes,

“After all these generations since Columbus, some of the wisest of Native elders still puzzle over the people who came to our shores.

They look at the toll on the land and say, ‘The problem with these new people is that they don’t have both feet on the shore.

One is still on the boat. They don’t seem to know if they are staying or not . . . can Americans, as a nation of immigrants,

learn to live here as if we are staying? With both feet on the shore?’”

This passage sat like a stone in my stomach the first time I read it. While I had appreciated the natural setting of each place I lived, I always planned to return to the firs and ponderosas of the Pacific Northwest. That supposed future served as an excuse to never fully connect to the land of the present. Until now.

To be a person with one foot on the ground while the other is in the boat is to be stuck. You can’t do much more than try to keep your balance between wood and wave. To stay upright takes so much energy that it can be mistaken for action. But you deny yourself agency by remaining in transition.

Wherein One Bed Turns Into Three

It was this desire for agency, however small, that prompted me to sign the Elizabeth River Project (ERP) River Star Home Pledge. The compacted, weedy “lawn” ponded when it rained, so I also signed up for their free rain garden consultation.

During our first meeting I learned the soggy area was too close to the house to be considered for a rain garden, but ERP also had a conservation landscaping grant to reduce rainwater runoff. They could design a small planting around one of our downspouts. That plan quickly expanded when we realized that our foundation needed regrading.

Houses are supposed to have a “positive grade” of 2-8%, meaning that the dirt against the foundation slopes downward away from the walls to keep foundations dry. Our grade was -4%. We were basically inviting stormwater to live rent-free in our crawlspace.

The ERP gave us two options: spend the majority of the grant money on hiring a contractor and get a little greenery, or do the work ourselves and get lots of seedlings. We chose sweat equity and a landscape design that eventually included 128 plants representing 21 species across 70×6 feet.

Over the next five months we had two more in-person consultations and a growing vine of emails. Even though we lived in the same city as the program managers, sending updates felt like sending airmail to another country. We were in foreign territory – the land of homeownership. Only by rooting in did we realize how little we actually knew about having two feet on land.

Prepping for the garden was the way we met our new neighbors. Those with dogs walked by daily, asking questions and commenting on the progress. A retired contractor who lived up the street offered his tools. It felt like the whole block was encouraging us onward. 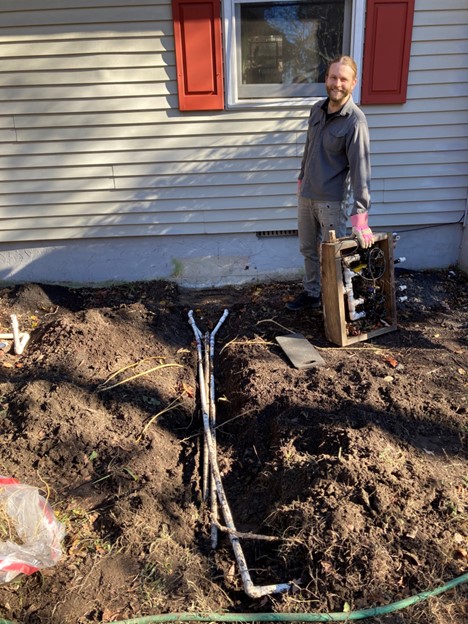 The work outside also introduced me to my non-human neighbors. A small colony of Brown Pelicans overwintered on our neighbor’s dock. A possum trundled through the back yard. It was while moving dirt that I heard the first cackle of the laughing gulls returning to the river in spring.

We calculated that it would take approximately 100 wheelbarrow loads to distribute the fill dirt. 175 cubic feet became one hundred loads, which in turn became 4 loads of dirt a day. That’s how we overcame the enormity of the project: we broke each major task down into smaller weekly and daily tasks.

That, and we called friends. Some tamped dirt for an hour, some hauled soil for half a morning. It all helped.

The last time I’d orchestrated such a big personal project was when we’d planned our wedding. It was an apt metaphor. The hours of work translated to a vow to the land and local ecosystem. The original entomology of “vow” from Latin meant “a solemn promise” to a deity and a life of service. A pledge to something larger than oneself, and in many ways mysterious.

Many vows ideally are a celebration of dedication. Buying one’s first home is an exciting – if stressful – event, as is a wedding. Both rest on the idea that one is taking a hopeful, definitive step forward. We can worry about ecological damage while also experiencing joy.

When the landscape design arrived in January, I again felt unsteady, my tongue awkward.  Amsonia tabernaemontana. Symphiotrichum cordifolius. Polystichum acrostichoides. Some of the plants on the list I’d never seen before except in books. It was a gift to be in the hands of a professional designer dedicated to working with the local ecosystem.

Finally, it was March 7th, 2022, aka Plant Day. It took two pickup truck-loads to deliver all the seedlings. After some initial advice, the landscape designer sped off to the next site. Then it was just me and 128 babies I’d signed up to nurture.

I spent the rest of the day looking at labels.

Timelapse of me arranging plants: https://youtu.be/IiKU06ZlPoc

The experience of touching different leaf textures and stems was both delightful and humbling. As I trudged back and forth, puzzling over the diagram, the overall design finally started to become clear to me. I felt it in my feet.

Then the rain and freezing winds came. And stayed. The new fill dirt turned to muck. We donned snow pants and rain jackets, our boots squelching as we moved from plant to plant. They weren’t kidding about that “come rain or shine” part they often include in vows. 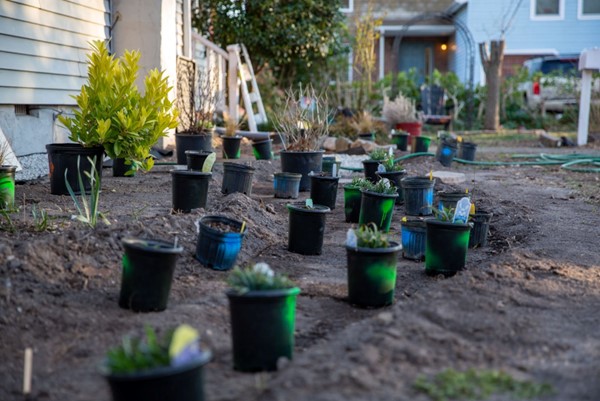 Laying out plants in and around the new swale

We’d planned on installing four seedlings a day for 30 days. Work, kids, and the weather quickly reminded us that real life often diverges from a neat plan on paper. Once again, I called friends.

Our neighbor Joleen came by one evening, and we drank wine as we planted pale purple coneflower, creeping sedge, and blue wood asters. My friend Kim spent a perfect spring afternoon helping me settle in foamflowers, dwarf crested iris, cardinal flowers, and Eastern red columbine. Yet another neighbor, Jessica, came by on her lunch break and got her hands dirty planting butterfly weed and bluestar. I wasn’t even home.

In retrospect, needing help turned out to be a gift. Whenever I walk by those parts of the garden, I think of my friends and the conversations we had on those March planting days. The iris corms I planted too deep didn’t grow, whereas Kim’s light touch was just what they needed. If I was trying to root into the land, what better way to do it than with friends who had lived here much longer than me?

Stepping Onto The Shore

One year after I observed that first monarch fruitlessly searching after her long journey, another glided through the yard. My six-year-old son was the one who spotted it landing on the butterfly weed seedlings, aka asclepias tuberosa. We sat for 20 minutes, watching as it repeatedly curved its abdomen like a safety pin clicking into place, laying eggs across multiple plants. I almost cried. 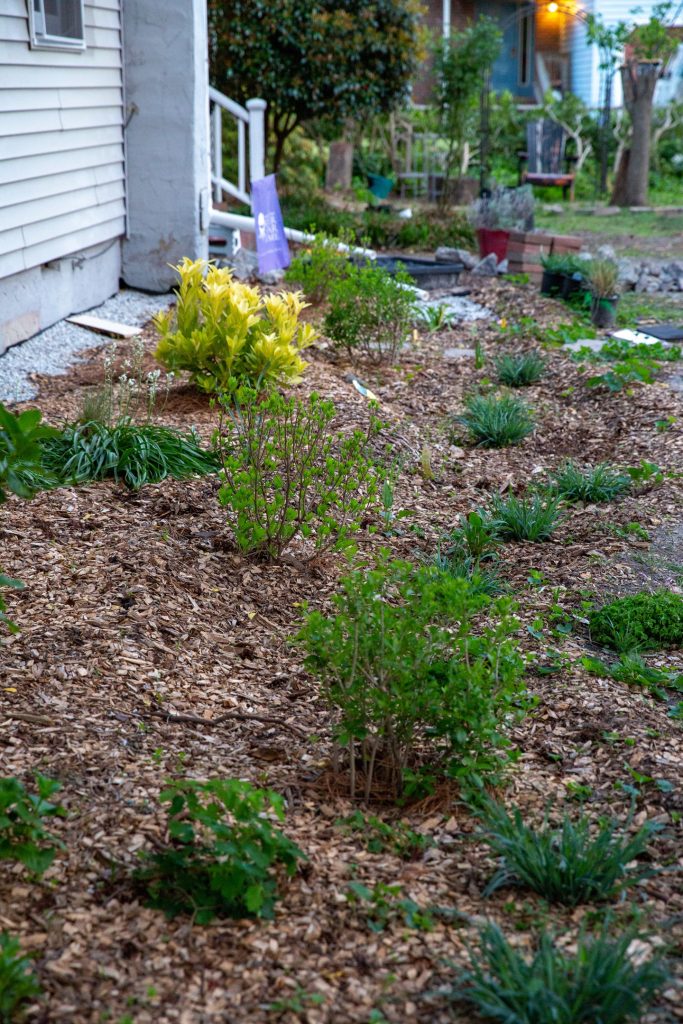 Immediately after planting and correcting the grade.

In the five months since the seedlings arrived, there has been satisfaction and setbacks, as in any relationship. What I did not expect is how many gifts I would be given. Gifts in the sightings of ruby throated hummingbirds, goldfinches, brown nuthatches, an array of native insects and butterflies. The unfurling of fiddleheads and friendships.

Each small sign that I am giving back to the local ecosystem instills confidence that we humans can mitigate climate disruption. All we have to do is break this global task into smaller and smaller regional initiatives, policy, and personal actions. We have to take our foot out of the boat.

As I type, there is more to do: edging to finish, weeding, pulling out invasives in the rest of the yard and replacing with natives. It may be foolhardy to root down in a sinking city. However, no place is safe from climate change, which means no life remains untouched by it.

If one location is just as precarious as another, perhaps the solution is not shooting off to Mars, but rather to give extended time and dedication to finding out the gifts of a region. To share those gifts with others, until it seems foolhardy to keep throwing such reciprocity away.

That old boat is rotted through the bottom anyway. There is nowhere new it can take us. With both feet on the ground we can finally walk towards a new future. We can create and exchange new vows. And of course, everyone is invited. 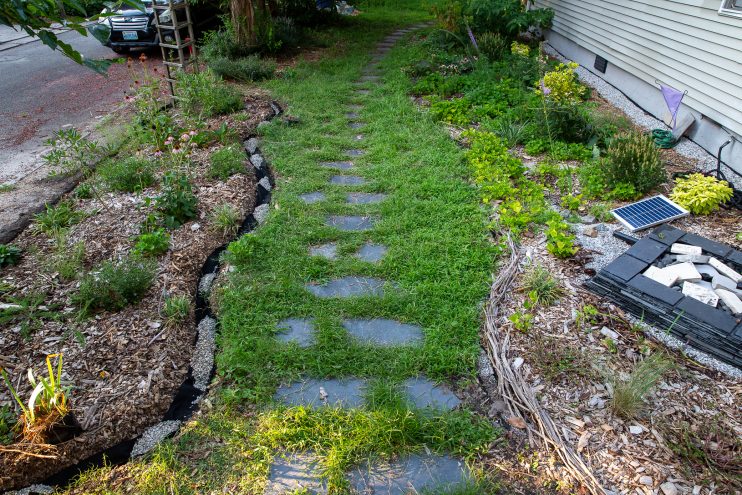 The project beginning to take root and bloom three months after planting. 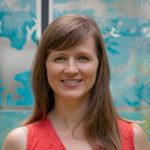 Kelly Morse is the author of the award-winning chapbooks Heavy Light (Two of Cups Press, 2016) and Thinking While Without Identity (Poetry International, 2022). Her latest project, Hothouse, a collaborative art installation about climate change, exhibited at the Chrysler Museum of Art and the Hermitage Museum and Gardens. www.kelly-morse.com

If you enjoyed reading this post and would like to support the Chesapeake Conservation Landscaping Council please consider becoming a donor.